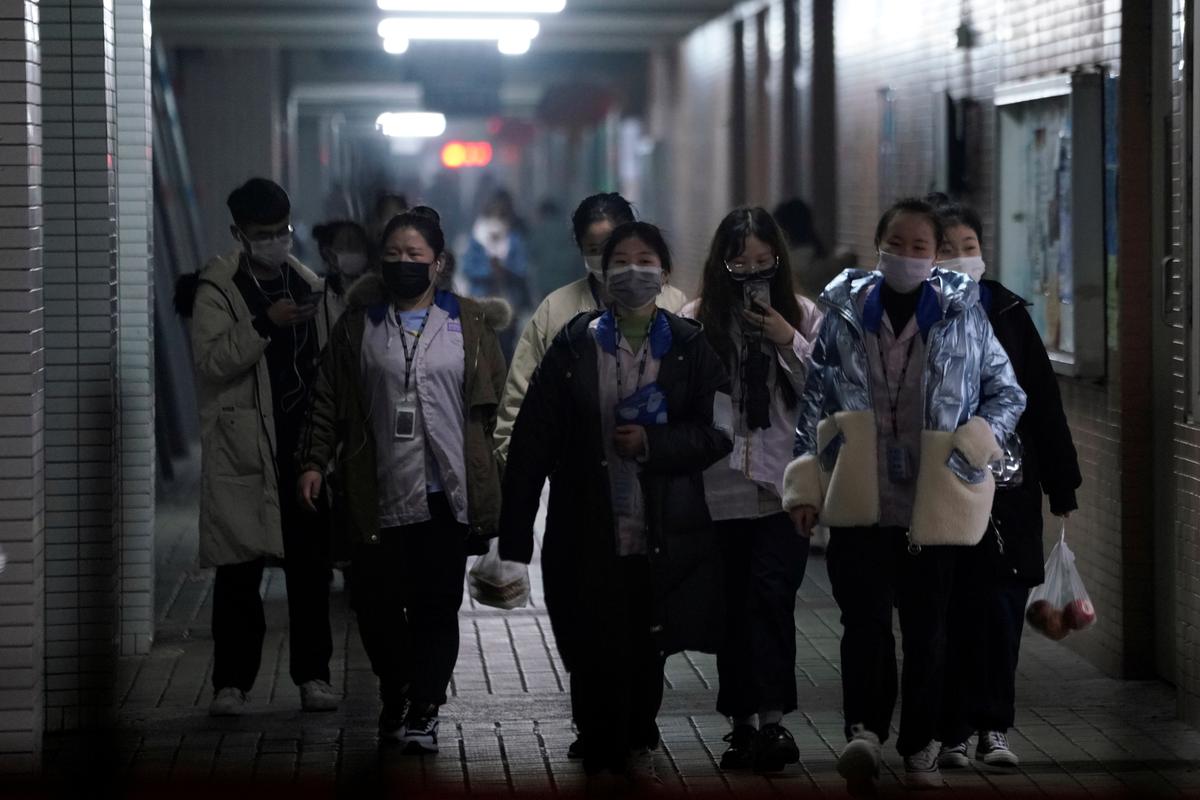 BEIJING (Reuters) – The Chinese province at the epicenter of the coronavirus outbreak reported a record rise in the death toll on Thursday under a new diagnostic method, and Beijing sacked two local leaders after criticism of their handling of the crisis.

Workers wearing masks walk outside their dormitory, in an electronics manufacturing factory in Shanghai, China, as the country is hit by an outbreak of a new coronavirus, February 12, 2020. REUTERS/Aly Song

Health officials in Hubei province said 242 people had died from the flu-like virus on Wednesday, the fastest rise in the daily count since the pathogen was identified in December, and bringing the total number of deaths in the province to 1,310. The previous highest daily rise in the toll was 103 on Feb. 10.

The reports did not state a reason for the dismissals, but the two are the most high-profile Chinese officials to date to be removed from duty following the coronavirus outbreak that began in Wuhan late last yet.

“Thank you Communist Party. It should have been done earlier,” Wuhan resident Wang You told Reuters.

Dozens of low-level health officials across the country have also lost their jobs for failing to contain the spread of the epidemic, which is believed to have emerged from a seafood market in Wuhan where wildlife was traded illegally.

The spike in the death toll came a day after China had reported its lowest number of new cases in two weeks, bolstering a forecast by the country’s senior medical adviser that the epidemic could end by April.

Another 14,840 cases were reported in Hubei alone on Thursday, from 2,015 nationwide a day earlier, after provincial officials started using computerized tomography (CT) scans to look for signs of the virus.

Hubei had previously only allowed infections to be confirmed by RNA tests, which can take days to process. RNA, or ribonucleic acid, carries genetic information allowing for identification of organisms like viruses.

The new diagnostic procedure could explain the spike in the death toll, according to Raina McIntyre, head of biosecurity research at the Kirby Institute at the University of New South Wales in Sydney.

“Presumably, there are deaths which occurred in people who did not have a lab diagnosis but did have a CT. It is important that these also be counted,” she told Reuters.

The new testing methodology is only being used in Hubei province so far, Chinese officials said.

Asian stock markets wobbled and the safe-havens of the Japanese yen, gold and bonds rose after the new Hubei numbers dashed hopes the epidemic was stabilizing and the Chinese economy could bounce back quickly. [MKTS/GLOB]

The World Health Organization (WHO) said on Wednesday the number of cases of infection in China had stabilized but it was too early to say the epidemic was slowing.

“This outbreak could still go in any direction,” WHO chief Tedros Adhanom Ghebreyesus told a briefing in Geneva.

Experts say a vaccine could still be months away.

The latest toll from Hubei pushes the number of deaths in mainland China past 1,350, with about 60,000 confirmed cases.

Hundreds of infections have been reported in more than two dozen other countries and territories, but only two people have died from the virus outside mainland China – one in Hong Kong and another in the Philippines.

The biggest cluster of cases outside China is on a cruise ship quarantined off the Japanese port of Yokohama, where a further 44 cases were reported on Thursday. So far, 219 of about 3,700 people on board have tested positive.

There was a happy ending for another cruise ship, the MS Westerdam, which docked in Cambodia after being denied docking rights in Thailand, Japan, Taiwan, Guam and the Philippines over fears one of its 1,455 passengers and 802 crew might have the virus, even though none had tested positive.

“This morning, just seeing land was such a breathtaking moment,” Angela Jones, an American tourist on the ship, told Reuters. “I thought: Is this real?”

Wuhan, a city of 11 million people, remains under virtual lockdown, and other major Chinese cities are facing severe travel restrictions.

United Airlines (UAL.O) said it would extend cancellations of all U.S. flights to China through late April, meaning all U.S. passenger carriers flying to China had now canceled flights into late April.

The move is the latest disruption to international travel that has paralyzed businesses and played havoc with major conferences and sporting events.

The Mobile World Congress, an annual telecoms industry gathering that draws more than 100,000 visitors to Barcelona, was canceled on Wednesday after a mass exodus by exhibitors due to coronavirus-related concerns.

The Formula 1 Chinese Grand Prix, originally set for Shanghai on April 19, was postponed, as was Singapore’s annual rugby sevens tournament scheduled for April 11-12, a source familiar with the matter said.

Hong Kong extended the suspension of schools till at least March 16 in a bid to contain the spread of the coronavirus in the city, where 50 cases have been confirmed.

In Taiwan, which has reported only 18 cases of the virus, cabinet proposed a $2 billion package to help the economy deal with the impact of the epidemic.